EW classified fire curtains sold as EI with the addition of a sprinkler. EW fire curtains offered as EI when applying a safety distance. They seem to be advantageous solutions for situations where EI is requested. But is it really allowed?

The difference between E, EW and EI

In order to find out whether solutions are acceptable, it is important to understand the difference between the E, EW and EI classification for fire-resistant doors. 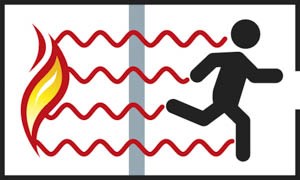 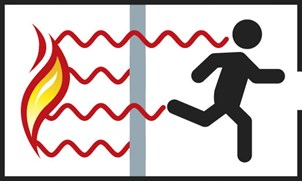 Class EW is the basic requirement for door constructions in the Netherlands. EW-rated curtains not only stop the flames, but also partly the heat radiation.

In contrast to door constructions, a wall construction always has an EI requirement. This is because things are placed against a wall, which should not ignite if there is a fire on the other side of the wall. Normally, nothing is blocking the passage, which is why we have lower requirements for these positions in the Netherlands. 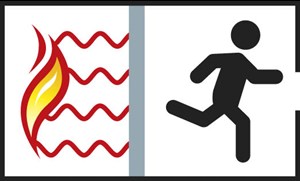 If a fire door or fire curtain complies with Class EI, it not only blocks the flames but also stops the heat radiation. Doors are, for example, given the EI requirement when storing hazardous substances or if the opening in the wall is wider than 6 metres.

EI therefore provides the highest level of safety, but an EI fire curtain is also the most expensive product due to its complexity. This is one reason why cheaper alternatives are being sought in the market.

One of the alternatives is an EW curtain, which could be used as an EI, taking into account a safety distance. The idea is that if you measure the heat radiation at a certain distance from a fire curtain, it is limited and the EI requirement is met. A Notified Body has even drawn up a report that supports this theory. However, the report in question is full of holes. Reference is made, for example, to the British PAS 121:2007, which already expired in July 2013. But apart from that you can understand that such a solution is not desirable. After all, an EI requirement that minimises heat radiation to the canvas is there for a reason. The Notified Body in question has received a rap on the knuckles and the report has been withdrawn.

EW fire curtain with sprinkler EI
Then there is the variant in which an EW fire curtain is turned into an EI solution by combining it with a sprinkler. Again, there is a report available that supports this theory. In this case, it's a very legitimate report which was preceded by a practical test. EW with sprinkler can thus become EI in practice. But again with a large comment. The test situation must be exactly simulated in practice. The same sprinkler head, the same pipe diameter and the same water pressure will have to be achieved. It's not a very realistic scenario. Especially since this solution will mainly be chosen if a sprinkler is already present. This makes the chance that the practical situation is the same as the test situation nil. If everything still needs to be installed, you can simulate the test situation, but the solution is no longer lucrative and the installation of an EI fire curtain makes it cheaper.

The solutions offered are therefore mainly tricks aimed at price-conscious buyers. In practice, the solution only provides a false sense of security.

With the CE on fire doors taking effect on 1 November, the fiddling with fire doors should be a thing of the past. But there are undoubtedly parties who, based on the principle of equivalence, will again try to sell an EW fire curtain with bells and whistles as EI.

The motivation to try to bend the rules is almost always the price. But isn't the price you pay when things go wrong in a fire many times higher? Are we prepared to play with people's lives because the risk of fire, and therefore the chance of it actually going wrong, is rated as low?

At Hoefnagels Fire Safety, we are not in favour of dealing flexibly with regulations in this way. On the contrary, we advocate going a step further than what the legislation prescribes. This not only guarantees security, but also business continuity. Limiting fire spread as much as possible and minimising damage should be the starting point when making structural fire safety choices.