Blog: Lifts save lives, even in the event of fire

Lifts save lives, even in the event of fire

With each incident, the discussion flares up again. If a fire breaks out in a flat or apartment building, should we be for or against the use of lifts? The collective opinion swings with the most recent occasion. We are dead against it if people anywhere in the world come to a tragic end in a stuck lift. And we're fanatically for it when we hear stories about people who can't go further when a lift is out of use and they're unable to use a stairwell. 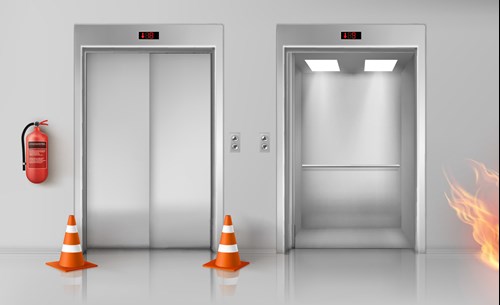 Outdated view
So belonging to the first or the second category doesn't say much. My position is that the current legislation and regulations are hopelessly outdated and that lifts should be allowed in many more situations than at present. I can substantiate that opinion with facts. I've taken account of the risk of not making friends in this emotional discussion by basing my point of view mainly on consideration of the positive and negative aspects. However, in my opinion, the hard facts do give a clear direction.

Fifty floors
A first fact is the current built-up area. Our country now has 49 buildings measuring 100 metres or more. These are mainly office buildings, but in the second and third positions on the list are residential towers in Rotterdam measuring 160 and 152 metres. You don't even want to think about leaving your penthouse because of a fire and then being condemned to the stairwell and having to descend fifty floors to reach a safe environment. Incidentally, the same rules apply to the use of lifts in the Netherlands, regardless of the type of building. Hopefully the 'top management' has a good physical condition.

"I want to advocate a reconsideration of policies based on outdated assumptions."

Where there's fire...
In the current Buildings Decree, the legislator assumes that if a facility is fire-resistant, it is also smoke-resistant. "Where there is fire, there is smoke" is a serious misconception. Smoke and fire spread completely differently. This threatens to reduce awareness of the risks of smoke. And it is precisely this smoke that claims far more victims than the fire itself.

Depending on others
Fortunately, the new Buildings Decree, BBL 2021, will contain specific test standards for smoke protection. These standards have been drawn up primarily with hospitals, hotels and day nurseries in mind — situations in which people are dependent on the care of others. It is interesting to see whether they can also be used for residential buildings and office high-rise buildings. Taking into account actual habitation or use seems to me to be advisable, in any case. In the case of apartment complexes, social housing associations and owners' associations can collect information on the mobility of residents. This could be a consideration to design the lift in such a way that it could serve as an escape route.

Mobility scooter
That brings me straight to another phenomenon: ageing. In the 1950s, just over 7 percent of people were over the age of 65. Now it's already 19 percent. Mobility is often a problem at that age. Many people are totally or partially dependent on aids such as a rollator (wheeled walker), mobility scooter or wheelchair. For the flat-dwellers among them, a lift is vital.

Evacuations
Providing the only way out of a burning building is counterbalanced by the risk of death or serious injury if lifts are used. Googling shows that in recent years there have been quite a few serious apartment fires in which the fire brigade ordered an evacuation. In fact, the use of lifts rarely represented a risk in these situations. Looking at the pros and cons, this gives a clear signal about the desirability of keeping lifts in use for longer periods of time.

Technical development
At a technical level, there are also developments which pave the way for the sensible use of lifts. For example, fire and smoke detection systems are still far from being installed everywhere. Let alone software which intelligently determines what is and is not a safe place to exit, based on reports from detection systems. So we don't have to assume that only the ground floor is a safe place. We can measure it and, if necessary, make an alternative evacuation possible. Further technical modifications are possible, such as a separate power supply for the lift installation. This ensures that the lift will not stop if power fails elsewhere due to fire and lift users find themselves trapped like rats.

I do not want to reduce the debate on fire safety to the question of which policy claims more or less casualties. However, I would argue for a reconsideration of policies which are based on outdated assumptions. Policies which could cost lives rather than provide security.

You can find this blog on LinkedIn as well.
Respond
;