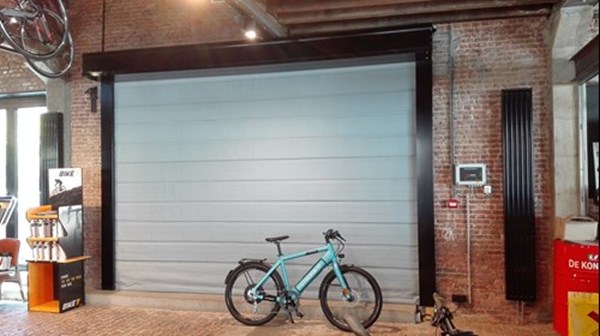 Until recently, extra fire safety measures were not required for an integral bicycle parking. Now the sales of electric bicycles is booming and the capacity of batteries is increasing, the fire risks of bicycle parkings is also increasing.

If the battery of an electric bicycle catches fire, a lot of smoke is produced and toxic fumes are released. If the bicycle park is storing multiple electric bicycles, this can quickly lead to large problems, Especially when there are people in the building who are less mobile, such as in residential care complexes.

Why does a battery catch fire?
Exact figures do not exist, but fire brigades throughout the country state that a battery of an electric bicycle catches fire at least once a month. Problems mostly occur during charging. The causes are diverse, from the use of non-original chargers to overcharging the battery.

But batteries sometimes also ignite spontaneously. If the bicycle has fallen, the battery could be damaged. A chemical reaction will occur in the battery cells, heating up the battery, which can ultimately catch fire.

How do you keep the fire in a bicycle park under control?
The fire risks increase even further as the capacity of batteries grows. Increasing amounts of energy are placed in an increasingly slimmer battery pack. Battery fires cannot be prevented completely. It is important to make sure the fire is contained in the bicycle park and remains manageable. Parking electric bicycles in a restricted area, a fire compartment, is one of the most fire-safe solutions. By equipping the bicycle park with a fire-resistant partition, the fire will be limited to the fire compartment. This gives persons present in the building the opportunity to get outside safely, while the fire brigade has the opportunity to fight the fire and limit material damage.

Do you also want a fire-safe bicycle parking in your building? Consider the application of Firescreen® fire and smoke shutters and screens. Compact and lightweight, they can be applied in many different situations. Our advisers will be happy to help you select the right fire curtain for your situation.