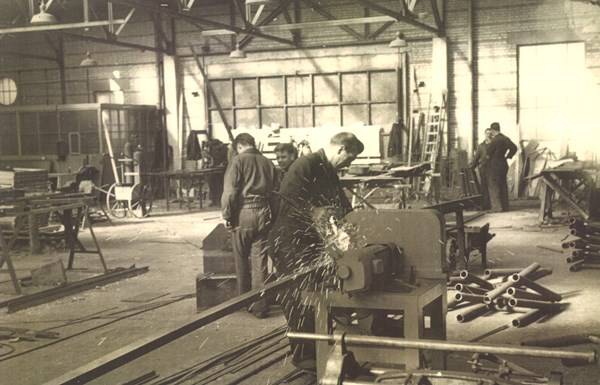 Hoefnagels Fire Safety is a family business with a history dating back to 1884. The company is now run by the fourth generation of Hoefnagels.

1884: Founding of the Janssen-Waijers company

The first steps are taken in 1884, when the Janssen-Wayers company starts making wooden shutters and awnings.

Janus Hoefnagels starts a forge in the IJzerstraat in Tilburg.

Jan and Kees Hoefnagels begin working at the forge. And — as befits a good Roman Catholic family — the third son, Ton, enters the monastery.

A long-term relationship between the two companies already existed through the forge supplying steel works to Janssen-Waijers. On 6 May Janus Hoefnagels takes over the neighbouring company of Janssen-Waijers. Knocking down a dividing wall physically merges the companies. Jan takes over the management of the Hoefnagels company, by then active in steel constructions and steel windows. Kees further develops the rolling shutters and awning company of Janssen-Wayers. (The 'ij' had by then become a 'y', for unknown reasons).

On 17 December 1962 Janus, Jan and Kees establish an NV, a public limited company (plc). Thus, the legal unification of both companies has thus become a fact. Janus, 78 years old at the time, retires from the company. Jan and Kees continue to run their own departments within the plc.

The steel constructions are becoming too large and the inner city too small. Hoefnagels and Janssen-Wayers NV, abbreviated to HJW, move to the new industrial estate Noord, which is the current Kraaiven industrial estate. The company purchases 10,000 m2 of industrial land, and an office of 300 m2 and a hall of 2,400 m2 is built.

After attending Technical College, staying as a marine on Aruba and completing an internship at a window factory in Germany, Ad starts preparing for his future as director of HJW. His father, Jan, retires 10 years later at the age of 65. By then, Ad has taken over the management position. From 1968, in addition to steel frames, aluminium frames from Schüco are also being produced.

In 1972, the public limited company is converted into a private company. It has more than 60 employees.

After his military service and with a Higher Professional Business Education diploma in his pocket, Cees Jr. joins the business at the age of 25. Ad's focus is now on the steel and aluminium windows. Cees Jr. takes over the activities of his father Kees Sr. in 1981 as director, focusing on the rolling shutters and awnings.

Some 685 m2 of space is added for the development of Schüco aluminium windows. One year later, the office space is doubled to 660 m2.

1984: Centenary of Hoefnagels and Janssen-Wayers BV

The centenary is celebrated extensively in the company's own building. Then-mayor Henk Letschert awards the City of Tilburg's badge as well as the Tilburg Trophy to the company. It was also the year in which the production of steel structures is stopped and the production hall is expanded by 1,210 m2 for the relocation of the private company of Hoefnagels Zonweringen BV. Another 1,105 m2 is added in 1989.

The switch from rolling shutter company to fire door specialist has its origins here. This first test is followed by many new developments and fire tests.

The growth of rolling doors and fire doors requires an expansion of 525 m2. As a result, the site is fully developed to its maximum of approximately 8,000 m2.

The existing office building is demolished and a modern, 2-storey office building with an area of 1,100 m2 is built. Another office for production and assembly is added there in 2001.

The structure of the company changes in 2003. The company name is changed to Hoefnagels Groep BV with three independent private companies underneath: Hoefnagels Aluminium Gevels, Hoefnagels Brand- en Bedrijfsdeuren and Hoefnagels Projectzonwering. The last mentioned private company is sold two years later to PBS in Tilburg.

Hoefnagels is the first company in the Netherlands to market a fire-resistant roller screen made from technical textile which meets all the requirements of the Buildings Decree. In doing so, it creates new opportunities for architects and reaffirms its reputation as a fire door specialist.

At the age of 60, Ad leaves his company after 36 years of service.

2009: Royal Warrant
Hoefnagels exists 125 years and celebrates with a huge party. During the festivities, the Hoefnagels Groep is named Purveyor to the Royal Household.

A continuing construction recession forces Hoefnagels to take leave of its activities in the manufacture of aluminium facades. After having been a partner of profile supplier Schüco for more than 40 years, this product group is discontinued.

This is also the year in which Hoefnagels Marine BV is introduced. The discontinuation of the activities of Hoefnagels Aluminium Gevels makes room for the transformation of this private company into Hoefnagels Marine. As a supplier of high-quality facades for the luxury shipping industry, there is sufficient potential in this market to continue this product group.

With the fusion of European legislation and regulations for fire-resistant closures, the fire-resistant roller screens of Hoefnagels are also in international demand. Hoefnagels starts exporting its Firescreen® products in 2013.

2014: Farewell Cees Hoefnagels, and 4theHoefnagels generation at the helm

Cees Hoefnagels leaves the company after more than 38 years of service and hands over the baton to Gijs and Rolf Hoefnagels. This puts the 4th generation of Hoefnagels at the helm of the family business.

In addition to private companies for the production, supply and maintenance of fire-resistant closures, Hoefnagels also sets up a private consultancy company, namely Protegu BV. This private company focuses on providing fire safety advice in the broadest sense of the word.

Management develops a new strategy for the company, one in which the focus is on Fire Safety. Because of this focus, there is a desire to sell the private company of Hoefnagels Marine. Within the family there is enthusiasm to continue this activity independently and the private company was sold to brother/cousin Luc Hoefnagels.

The management team sets out a new vision for the future of the company: one European operating party, for everything concerning structural fire safety. Hoefnagels Branddeuren, Hoefnagels Safety Services and Protegu merge to become the Hoefnagels Fire Safety brand.